The Deep Waters of Imagination 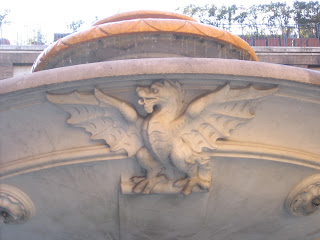 This morning, I sat down to eat my breakfast of orange, banana and cantaloupe, propped my phone up on a spikey conch shell, and clicked on the Washington Post icon. The fruits vary, but the rest of it is my routine, and rarely does the news surprise me. But this morning, it did, when I read that Donald and Melanie were infected with the corona virus.

My first thought was that something doesn’t smell right, and it wasn’t my cantaloupe, which smelled quite delicious. DT is always hiding anything that makes him look bad, so why wouldn’t he hide this? It seemed to me that, if he did catch the virus, he would deny it as long as possible, while everyone scrabbled for the truth.

But I couldn’t figure out how this could be good for him. When my wife, who never eats breakfast, tucked herself into her office, I went to join her, and asked her what she thought. She could think of lots of reasons why this could benefit him, and quoted others from social media.

For example, after making such a mash-up of the debate, and hearing media figures use words like “embarrassment” and “shitshow”, maybe he doesn’t want to have any more of those.  Or it could be a more complicated plot than that. Maybe he’s going to pretend to die so he doesn’t have to pay his debts, or go to prison? Could happen. Everybody thought the October surprise was going to be a vaccine, and nobody was going to have any faith in that, either.

So this is what it’s like having a pathological liar in the White House. There’s nothing he can do that seems believable, up to the point of dropping dead. I’d assume he was faking, unless he keeled over while yelling at reporters in front of a helicopter, and even then, only if a few of them from different media outlets took his pulse. The only thing I believe is that he’s a really inventive liar, with a prodigious talent for the art of the bullshit.

Looking at his chart, things do look grim, it’s true. I’ve been saying that since the summer, but I’ve also seen equally stressful aspects at other times – such as during his impeachment – and found him still in power at the other end of them. So I haven’t been sanguine about the election. Not me. I’m biting my nails at the same pace as the rest of you.

October is a strange month, with Mercury in Scorpio skulking around, burying some bodies and digging up others. Scorpio is the sign of death and taxes, so it makes sense to postulate that DT would fake death to avoid being prosecuted for tax fraud. The Messenger of the Gods, instead of darting through the air on winged boots, is peeking through the foliage, rooting through the trash, uncovering secrets, setting loose snakes and spiders.

Mercury is moving very slowly in October, because it’s going retrograde mid-month. So it’s taking its time, and there’s time for every anxiety to go a little further, to bump against all the monsters that lie in the deep ends of our psychic pools. Knowledge loses its edges, when you go this deep, and the imagination takes over. These monsters are usually invisible, but they can suddenly loom up, all scaly claws and pointed teeth.

In this country, we are always being prodded in the imagination. That’s what capitalism is, after all:  gathering customers by hooking them on images of wonderfulness. The surrealism of advertising swallows new technology, blurring more and more the barrier between fantasy and reality. We are also hooked by the things we find terrible and fearsome, and so we’re served up everything from roller coasters to horror movies. Our current president, trained by the TV industry, has never given any allegiance at all to what’s real.

This is a country that’s been built on myths, right from the beginning – myths of freedom and equality – so there’s been a kind of double vision. We’ve all been trained to see and not see. We’re trained to hunger, and not to share. We’re trained to chase what’s insubstantial, and to ignore what’s common and necessary. And power comes to those who know how to manipulate myths, direct the glow that dazzles us, and turn us away from what they do not wish us to see.

In the middle of October, Mercury goes retrograde in a tricky spot, opposing Uranus, planet of revolution. Because Mercury is moving so slowly, it lingers over this aspect. There’s an inherent contradiction here, because Uranus is about swift, unexpected changes. Does this mean that there will be sustained social change this month? There are so many things that could go wrong that I’m not predicting a smooth glide towards justice and accountability. It looks messy, to tell the truth.

And there’s another turbulent influence, as Mars storms through Aries and makes hard aspects to the planets in Capricorn. Because Mars is also slowing down to change direction, all these aspects take longer, and between them, they cover the whole month. They’re fierce and fiery, and they’re all about power. So if the mighty don’t fall this month, it won’t be because the trees haven’t been rattled.

Mars also opposes the sun in Aries/Libra, highlighting the archetypal conflict between Self and Other. It’s not easy to find balance, when you’re seesawing between your own drive to survive, and your basic human need to relate.  This is the central motif of the corona virus, which has us all at arm’s length from each other, looking for that sweet spot where you’re safe but still connected.

At the end of October, Mercury leaves Scorpio for justice-oriented Libra. It goes direct on Election Day, while making a long square to Saturn. This looks like a delay, and I’m sure we’ll all have to wait for the election results.  I know this is something that brings up some very basic fears for many of us. There’s the specter of the vote being snatched away through barely-lawful means, and of democracy itself completely failing, and then it’s a few steps to Nazi Germany. As a lesbian married to an immigrant, this is when I see myself stealing away in the dark of night.

It would be nice to go the other way, to see our democracy seal over its current cracks and omissions, rather than failing completely. And as Mercury and then Mars go direct in November, and as Mercury goes over the opposition to Uranus one more time, there are more opportunities for truth to emerge. The new moon and full moon charts in October are turbulent, but the one in mid-November looks more harmonious. Inauguration Day doesn’t look that peaceful, however.

There are definite changes coming, I can see that. In December, Jupiter and Saturn, tightly conjunct, enter Aquarius, like a pair of unlikely lovers leaping into a freer world.  In Aquarius, there’s more room to breathe, to invent, and to create community. But all through the coming year, they make squares to Uranus in Taurus, so it doesn’t look like this freer world is going to be a walk in the park. There are a lot of people who are willing to uproot trees and burn bridges rather than to accept a new balance of power.

Meanwhile, I think the most important thing is to go down into the deep waters of your own psyche, and try to make friends with some of the monsters swimming around down there. Nobody can lead you around by your imagination, if you’re clear about what’s real and what’s just a repeating film clip of your fears. Remember that the future is not real yet. It’s something we are all still imagining. 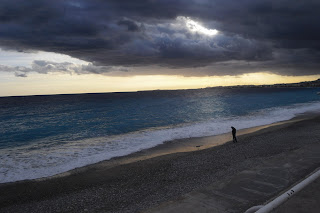 Posted by Jenny Yates at 4:23 PM No comments: