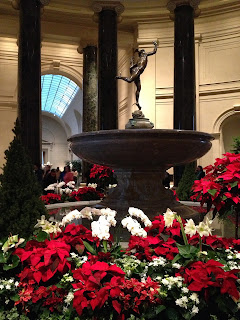 Here in the northern hemisphere, the seasonal celebrations do make sense.  It’s scary when the sun begins to disappear, and so people need to compensate with brightness and glitter.   I can imagine the conversation going like this, as those early Europeans hung out in front of their caves, whittling goddess figures with bits of flint.


“Is it just my imagination, or is the sun leaving us a little earlier every day?”


“Maybe we should get out some shiny things that look like the sun.  If it sees pictures of itself, it will want to stay longer.”


“Great idea.  I’ll put some torches up in the trees, and you go get some iridescent rocks.”


We still do this.  The effort gets more and more frenzied until we get to the winter solstice, and then, miracle of miracle, it works.  The sun takes note of our homage to its brilliance, and begins to stay longer.


This is also the season dedicated to the two-thousand-year-old sun god, Jesus.  It seems that Jesus was a gentle, peaceful figure for the most part, with a message about forgiving everyone and not owning anything.  In its checkered history, Christianity hasn’t always promoted this approach.   What happens when a religion is embraced by the wealthy and powerful, when it’s used to judge and punish?  It’s corrupted – with less and less of the original poverty, humility and compassion.


However, some vestiges of the original Jesus story pop up now and then.  The Pope, for example, said, “Who am I to judge?”  This is not to say that the Pope and I agree on a lot of things, but it’s nice that we are both trying to be less judgmental.  We all know that Jesus was not into casting stones.   I also appreciate the ministers who have been quietly urging their congregations to support and sign up at the government health care website.  I’ve heard that Jesus was into taking care of the sick.


In our society, there’s a pressure towards excess at this time of year, because we live in a world that equates commercial enterprises with success.  Spiritual practices – including Christianity – can offer a different set of values, ones that are older and more powerful.


t’s a contradictory time, partly loud and boisterous, partly quiet and meditative - and that makes sense since the sun is moving through one of the double signs, Sagittarius, and soon Mercury will be there too.  Sagittarius is the centaur - half human and half animal - and this sign is always trying to get away from itself, and concurrently trying to get itself together.  Inner peace and balance are not easy to achieve when the horsy part of yourself is always eager to run, to leap, to chase ecstatically through the fields.  Whenever anything is good, more is better.  Whenever anything is tough, there’s always the temptation to run away.


But during the next month, the impulsive fire of Sagittarius is tempered by more watery influences. Water is not as strong as it was in November, but  Saturn, Jupiter and Neptune are still in water signs, so there continue to be a lot of strong feelings.  Intuition is acute, delicate sensibilities more pronounced, and there are deep sympathies that can dissolve the usual divisions between people.


A balancing influence during the middle of December is the trine between Jupiter in Cancer and Saturn in Scorpio.   Jupiter expands and Saturn contracts, so these planets have opposite effects most of the time.  They are the two social planets, with Jupiter encouraging social connections, rewarding people for their gifts to the community, while Saturn demonstrates the social limits, and scolds people who flout traditional taboos.


This harmonious aspect shows more responsiveness between the two.  When they are in trine, Saturn is less cautious and fearful, and Jupiter less ambitious and extravagant.  They take turns, each allowing the opposite principle to operate.   Jupiter expands until it no longer makes sense to go further, and Saturn contracts until it no longer feels good to guard the limits.   Each rescues the other from extremism.  And so we may see everybody being more reasonable, especially around the time this aspect is exact on December 12.


However, this is followed by the full moon on December 17, in the fast-moving signs of Sagittarius and Gemini, on the same day that the rebellious planet Uranus goes direct.  A lot of energy is unleashed at this time.  It’s a time when things can run away, catch on fire, or get hit by lightning, so it’s not the best time to do anything wild and crazy.  If you can stop yourself.


And this begins a tumultuous few weeks.  The harmonizing Jupiter/Saturn trine recedes, like a couple of maiden aunts edging away from a murder scene.  And Mars engages with the Uranus/Pluto square.  Mars represents the urge to action, and it’s currently moving through the peace-loving and justice-seeking sign Libra.  Thinking of the pope, I’m moved to ask if we can seek justice without making judgments.  It has been done before.  Think Nelson Mandela.  It requires the ability to forgive, while not forgetting.


Even in the idealistic sign and generally moderate sign Libra, though, Mars is forceful.  And it will be leaping into a long-running  war – the Uranus/Pluto square, the conflict between new rebellious forces and old entrenched interests.  Old systems, ways of dividing people based on class, race and gender, are crumbling, and this is mostly a drawn-out process.  But this is one of those times when there’s more and faster movement, and when the resistance is also stronger.  Battle lines will be drawn.


Mars is going to be in Libra till next spring, since it retrogrades here, and it will engage with the Uranus/Pluto square twice more.  And so the message will be writ large, and then underlined a couple of times.  Mars in Libra asks how we choose to treat each other, how we can cooperate, how we can live peacefully together in this world.  And because it’s Mars, it doesn’t always ask politely.


These are the questions that come up, loud and clear,  as we move through another solstice, and towards the end of another calendar year.  It’s one of those times when several cycles come together, and these times are always unstable but highly creative.  Mars, as a catalyst, will point unerringly towards the next collective change – and it will be about balancing the scales.
Posted by Jenny Yates at 5:51 PM