A Love Letter to Michfest

So I’m getting ready to go to Michigan, the fortieth and the last Michigan Womyn’s Music Festival.  I haven’t started packing yet, although I leave the day after tomorrow.

I remember my first Michfest, twenty-seven years ago.  It was 1988, and Marisol and I had just gotten married that spring.  It took a long time to get in the gate, and the sun set before we found ourselves on the land.  We were tired and dispirited as we walked along, carrying all our gear, peering into the shadows, looking for a place to camp.  Marisol was the expert camper, I was a novice, so I was mostly holding the flashlight while she struggled with the various tent pieces.

The next morning we thought it was raining, but when we poked our heads outside the tent, we found we’d camped right next to the showers.  There were a row of naked women laughing and squealing, since the water was icy cold.  It was endlessly entertaining.  We already felt better about being there. And later on, when we got in the water ourselves, we experienced something akin to being inside a Sno-Cone.

Sometime between now and then, they added heaters to the showers, and so women don’t necessarily sing out when they get into them.  Michfest has changed, grown up.  They used to have a special over-40s area, and at some point, it became over-50s.  Camping has gotten harder for me as I’ve entered my 60s, and Marisol has completely given it up.

But I still go once in a while.  When I’m there, I still give astrology workshops, as I have since 1988.  I soak up the feeling of being in a woman’s village, a place where women are absolutely safe from predators (except mosquitos).  A place where women can get away from the male ego, and its tendency to demand all the space and all the attention.  A place where we support each other, listen to each other, and give each other room to create.  It’s not like all women are the same, but we do have a culture of our own, and it’s hard to see this in the ordinary world, where the harsher light of male culture drowns it out.

This is not to say that Michfest has been a peaceful Eden all these years.  Women do differ, and there have been vehement disagreements over all aspects of feminism, sexuality, gender, race, and cultural appropriation. Fierce battles have been fought with words, with the ultimate goal a collective raised consciousness.  It’s an ongoing process, sometimes as shocking as those cold-water showers, but many of these conflicts have led to changes in the way the festival is organized.

In the last few years, Michfest has been embroiled in the most virulent conflict of its life, from a group of MTF transgender activists who say the festival discriminates against them.  They initiated a boycott against Michfest and the artists who performed there.   The conflict may have begun as a desire to be included, but ended up as a campaign to destroy.

I remember when S/M women felt that there was no place for them at the festival, back in the day, and now there is an area where they can play all night long.  There were signs that this same process of assimilation was happening with trans women, but we’ll never know how it might have played out.  Michfest is ending.

And from my point of view, there’s still a terrible need for it in the world.  Lesbians are more assimilated than they were in 1988, but feminism hasn’t progressed all that much since then.  There is no other place where several thousand women can live for a week without men. There is no other place where we can discover who we are, and what kind of world can be created without patriarchy.

The aspects during the coming week show a time of great jubilation, and a time of mourning and sadness, all at once.  Venus, Jupiter and Mercury will be together in the bold, exuberant sign Leo, and this is perfect for getting up on there on the stage and giving everything you have to give.  It’s a wonderful planetary grouping for a week-long celebration, in which every woman dresses in whatever gives her most joy.  It’s great for group hugs and kisses, and campsites festooned in banners and ribbons.

But all three planets are squaring Saturn, the planet of limitation.  Saturn is about knowing when it’s time to give up, to let go.  Saturn turns out the lights when the party is over.

And so I expect to see a lot of laughter and a lot of tears, during the coming week.  I’ll be going through my own emotional roller-coaster too, because Michfest has given me so much.  It’s not heaven, but it’s a better world.
Posted by Jenny Yates at 4:47 PM No comments: 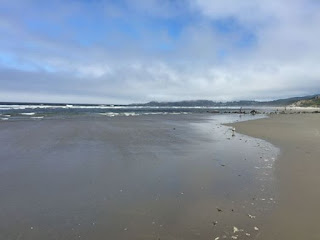 June was a runaway month, in more ways than one.  And I’ve run away to Oregon.  As the waiter at Zach’s Bistro said yesterday, I’ve swapped coasts.  And now the ocean is on the wrong side, and everything seems like the inverse of what it was before.

Yesterday I was sticking my toes in the well-chilled waters of the Pacific, thinking about how the US has undergone a sea-change in the last few weeks.

It began with the horror of the AME chuch killings in Charleston.  Like everyone else in the country, I lost something precious when those good people were murdered.  I was ready to bow out as a member of the human race.  Or maybe to pull a Rachel Dolezal and stop being white.  And to retire as an astrologer, too, because I was expecting good things from the Jupiter/Uranus trine.

But it just brought home that there are really no good or bad aspects in astrology.  The Jupiter/Uranus trine was a release of held-back energy, and it manifested in a lot of ways.  The murderer in the church was a pent-up mass of old fear, guilt and prejudice, and he expressed all that.  He was trying to start a race war, but instead he shocked a lot of white people out of denial.  He represented a demonic undercurrent, a social shadow, and when he brought this shadow out into the light, he forced  people to recognize it.  And so with the energy he unleashed, he destroyed his own flag.

President Obama, in his eloquent speech at Rev. Pinckney’s funeral, said that the murderer was being used by God -  to bring the flag down, to make a deeper reconciliation out of all that grief.  I can echo that, although I would say “fate” instead of “God”.   What the murderer set in motion was larger than him, larger than the hate he carried.

Other kinds of held-back energy were released as June ended.   First, Obamacare was upheld by the Supreme Court, and the result was a mass exhalation of relief all across this land.  Worried people everywhere, people with low incomes and sick family members, could rest a little easier.

Then came the gay-marriage decision, followed by a cascade of joy in my community.  Social media exploded with celebrations, not just from my lesbian and gay friends, but from all our allies.   For me and my wife, this means we can live anywhere in the US, without forfeiting any rights.  We can fantasize about moving to Florida when we get old, just like millions of creaky old straight couples.

And of course, the current doesn’t just stop with us, the gay and lesbian community.  Lots of anti-gay-marriage people have been caught in the same vortex of energy, and are expressing it in the opposite way:  talking about seceding, about getting divorces, about moving to other countries.

I read a long, hilarious stream of comments from people complaining that the Supreme Court was not taking God’s law into account.  Of course, the first thought that always crosses my mind is how can these people presume to speak for God?  Isn’t that the definition of hubris?  And the second one:  don’t these people know that the Supreme Court is legally required to ignore God, as well as Buddha and Allah?  But as ignorant as these people are, they’re caught in the same whirlwind as me, and, like me, they feed it with their emotional responses.

So the energy keeps moving, keeps circulating.  None of us can hold a line, in the face of such dramatic social forces.   As we look across the circle, at the people on the other side, we see that they are also rocked.  Those faces that seem so unfamiliar – and sometimes terrifying – are human beings, being summarily shaken out of their stasis.

As July begins, Venus is slow-dancing with Jupiter, and you can see this lovely conjunction in the western sky after sunset.  We also have a full moon on July 1, further encouraging an outpouring of energy.  With this full moon close to the US’s natal solar position (exact on July 4), this is a chance for everyone to celebrate their own particular take on this country – what it means, what we care about, what we need from our communities, where we are going.

July doesn’t have the fast pace of June.  Jupiter moves quickly away from the trine to Uranus, although Jupiter represents different things than she did before this aspect happened.  The social contract is a different one these days.  Gay men and lesbians have a little more dignity, a little more visibility -  and we are a little more ordinary than we were before.  (Of course, this takes some getting used to!)  There will still be lots of celebrating all through July, as Jupiter continues in Leo, but there’s also preparation for a more sedate and sensible approach in August, when Jupiter will enter Virgo.

Venus is moving slowly all through the month, because she will go retrograde on July 25, for about six weeks.  During her retrograde phase, Venus will bring back old friends and lovers, old hobbies and pleasures, and old creative inspirations.   This gives everybody plenty of time to chew over the changes that we’ve seen.  Options have opened for everyone in the gay and lesbian community, and that will mean a lot of personal decisions.  Rush to the altar?  Or wait?   As Venus slows down, there’s time to consider what it all means on the most intimate level.

So in July, there will be a certain sense of arrested energy.   This also gives us all time to think about the earth, our home, as the globe heats up.  In mid-July, there are four planets in Cancer, all bringing up security issues.  Mercury and Mars in Cancer will be opposing Pluto in mid-month, so some deeper concerns will emerge.  What makes us safe as a world?  Trying to avoid everyone who’s different from us?  Or working together to ensure drinking water for our grandchildren?  Piling up riches?  Or helping each other stay healthy?

The larger picture was drawn for us in June, and now it’s time to fill in the details.  How do we take care of ourselves, each other, and the earth, all at once?  We all have different answers to this question, and sometimes the answers are directly inverse to each other.

Here, in Oregon,  as I watch the waves break on the shore, I wonder about the profound, subtle changes that cause this constant motion.  One thing is clear though.  We all feel it.  No matter where we stand, no matter which coastline we track, the deep water is common to all of us.
Posted by Jenny Yates at 12:32 PM No comments: