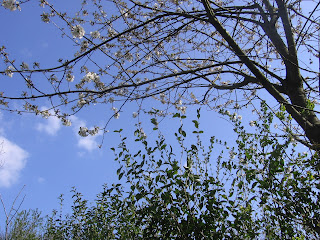 “What is up with that bird?” I’m wondering, as I listen to a long, drawn-out chittering.  This isn’t birdsong.  It doesn’t sound like a celebration of spring, or an advertisement for love.  It sounds more like an urgent telegraph.  Maybe it’s calling its mate to hurry home because there’s a squirrel inching closer to the nest.

It’s a cool day, with a light wind blowing, and it’s reached that blessed spot – not too cold any more, not too hot yet - where I can actually keep my office window open.  So all through the day, I hear half-understood messages from all kinds of passersby.  I can guess at interpretations, but I can never really know.

In a couple of weeks, I’ll be traveling.  I’ll be one of those voices on the wind, flitting from one place to another, as I head south, visiting friends along the way, until I reach Womonwrites.  I’ll spend a week at the lesbian writers’ conference -  visiting friends, picking up inspiration, giving a workshop, doing readings for people, and of course, playing a little Scrabble!

There’s a lot to do before then, I know it, but I’m having a hard time getting my act together these days. Yes, it’s partly because Mercury has been retrograde the last three weeks, and is just about to turn direct again tomorrow  (on May 3, 12:33 pm EDST).  When Mercury changes direction, it’s always very slow for a week or so.  This gives us time to think about what’s next, hopefully, before the pace quickens.

But it’s more than that.  It’s the inconjunct between Jupiter and Neptune, which will be with us all through May.  All Neptune aspects invite contemplation.  They take you away from business as usual.  Nothing routine seems all that compelling.  They invite you to back up, to take the long view, to see everything with a cosmic perspective.  Neptune dissolves the barriers.

If I want a Neptunian view from my window, I blur my focus, and all I see is a mash-up of bright green.  It’s lovely.  When I hear a bird sounding an alarm, it blends into the overall music -  the songs of other birds, the buzz of insects, the whistle of a faraway train.  It’s all one.  That’s Neptune’s message, especially as it moves through its home sign, Pisces.

Neptune is the planet of spirituality in its purest form.  This is not about laws, not about dogma, not even about ethics.  It’s impossible to treat anyone wrong if you understand that you are that person, and that person is you.  We all come from this state of beautiful oneness, and there’s a part of us that always yearns for it.

In my old coven, we used to sing this song:

We all come from the Goddess, and to her we shall return,
Like a drop of rain flowing to the ocean.
Hoof and horn, hoof and horn, all that dies shall be reborn.
Corn and grain, all that falls shall rise again.

And yet, and yet.  When this lovely oneness broke into parts, when this world of variations happened, it happened for a reason, no?  We incarnated with stories, phobias, wisdom, and attractions already in place, ready to stitch together our own little piece of the quilt.  If it was whole to start with, what are we making?

For me, this is the central paradox of any spiritual viewpoint.  I do believe we are making it as we go.  I believe we are creating with every dream and thought and movement, calling into being something that never existed before.  And so my sense is that this wholeness is not a static thing, even though I understand the contradiction.  It’s whole, yet it becomes.

And what is Jupiter doing in this Neptune/Jupiter inconjunct?  Jupiter is the planet of expansion, and whenever it’s in aspect with any planet, it eggs the other one on.  So the diffuse and holistic awareness of Neptune is exaggerated, publicized, trumpeted by Jupiter.  Sometimes this is a good thing, as in the Climate March this week.  Jupiter is good at writing placards, making speeches.  And it’s now going through Libra, so it also inclines to legal strategies.

But although Neptune is the planet of saintliness, of enlightenment, of all-encompassing spiritual awareness, it’s also the planet of illusion and delusion.   And so Jupiter can exaggerate this confusion too, while this Jupiter/Neptune inconjunct is going on.  Conspiracy theorists, for example, have a bigger and more holistic world view.  They see all the ways that the little threads come together.  But are they contributing to spiritual principles like peace and universal love?  What’s left out of this bigger world view?  What remains unseen?

And none of us can see it all.  We are humans, possessed of a very useful focused vision which helps us find edible berries and avoid mastodons.  We aren’t supposed to ignore the physical messages around us, and just spend our time just contemplating eternity.  We’ll be back there before we know it;  it won’t be long.

This Jupiter/Neptune inconjunct is seductive, encouraging us to take the little we know and run with it.  And sometimes you have to do it, you have to have faith in the visions that entice you, the ones that make your heart sing.  But I see it as a slow process, and a process that all beings have to do at approximately the same time.  It takes time to grow, to see more than just the fields and woods that surround us, and yet to still see them clearly. 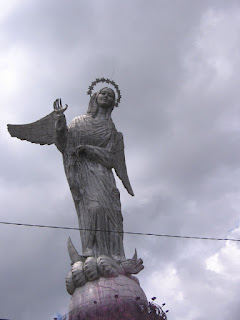