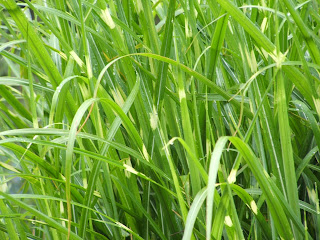 I hope the neighbors are happy. We finally got the grass cut. I would’ve been quite happy to just let our lawn become a meadow, and I think the rabbits would’ve liked that better too. This is suburbia, though, and we would have gotten cited by somebody or other. But as I look out my window, I miss all that graceful tall grass, sprinkled with bright little wildflowers, and I wonder about the price of my obedience.

Our lawn inertia was just one area in which we were stalled. A lot of things are on hold right now, as Mercury slows down, ready to go retrograde on May 10. I’m getting my basic work done, but all larger projects seem paralyzed, even the ones that are closest to my heart, like the novel I’m writing. Spring itself seems reluctant to take over from winter.

With Mercury retrograde through the rest of the month, forward movement will be unlikely. But moving backwards isn’t bad, since it will give us all a chance to pick up some of the balls we’ve dropped. Mercury will be in the frisky air sign Gemini until May 22, when it moves back into solid, earthy Taurus. It basically trades places with the sun, which will be in Taurus until May 20, and then in Gemini. The Gemini influence adds to the chatter going on around us – the information, and sometimes misinformation, that everyone is picking up. But the Taurus influences this month keep things mostly steady for the time being.

Every new moon is the beginning of a new chapter, and May’s chapter starts with the new moon in Taurus on April 30. This gives this lunar cycle a stable, unwavering Taurus quality. However, there are a couple of indications of underlying changes. At this new moon, there’s an eclipse, which signals an important shift in perceptions. And the moon and sun are also conjunct Uranus, the planet of change. What’s going on with these things? It seems like something is peeking out through the long grass.

The lunar nodes have to do with karma, and at every eclipse, they meet up with the sun and moon, one way or another. In an individual’s birth chart, the nodes signal the work that you signed on to do in your lifetime. The current positions of the nodes show the work that we are all doing, here and now, as a global collective. The children being born now will take up this work more intentionally, but it’s still here for all of us to do at this time. It’s about turning away from the excesses of the past and finding balance.

Currently, the north node is in Taurus, and so it asks us to pause and sink our feet deep into the earth. It’s about living simply and sustainably, grounding ourselves in the moment, and appreciating all the gifts that Gaia gives us. This is our work of the moment, and Mercury retrograde is perfect for this. In Gemini, it starts out with a lot of fast talk and restless gestures, but then it’s like a gear running down, slowly losing momentum and becoming still. As Mercury retrogrades into Taurus, we speak more slowly and deliberately. We tell the truth, recognizing what’s really happening in the world around us. These words have been said before; they are not new. But they have to be said over and over, until they are heard.

So this is a good time to stand on the earth, listen to her, and take in what she feels. We know that we – all of us together -  need to live in a more balanced, sustainable way. We know that the economy needs to be entirely different, and that both extreme wealth and poverty are toxic for this planet.

What about that Uranus conjunction to the new moon?  I’ve noticed that the fixed signs, the ones that are most firmly planted in their world-view, are also the most explosive ones. The more flexible signs know that, if you know how to bend, you don’t break. But for the fixed signs, there’s so much resistance to change that it comes as a thunderclap. Change is inevitable, a natural process, and if things are calcified, change involves some breakage. So this is the other side of this gentle, calm Taurus energy. We need to simplify and ground ourselves, and figure out ways to live sustainably, yes. But if we human beings can’t do this, it will take an explosion of some kind to bring us to balance.

So Uranus’ position - near the sun, the moon, and the north node -  is by nature of a warning. Nothing could be gentler and easier than loving the earth upon which we live. But to enact this love, we have to embrace some dramatic redistribution of resources, including power. We have to learn how to live without exploiting her, or each other. If we don’t voluntarily change, then change will be foisted upon us.

The other important thing that’s happening in May is that Jupiter is going into Aries. Jupiter takes about a year to go through a sign, so this is like the astrologer’s new year. It’s a new beginning, especially in Aries, the first sign of the zodiac. Jupiter is the planet of community growth, and it tells us something about where the community’s energy will take us all. As always, there’s a bright side to Aries – heroic, passionate, spontaneous, courageous – and a shadow side – competitive, militaristic, willful, uncooperative.

And so this doesn’t look like a particularly tranquil year. Jupiter in Aries favors the revolutionary, the iconoclast, and the inventor, as well as militants of various stripes. At its heart, Aries is about the search for the true self, and so you’ll see more people chopping through the weeds and making their own paths, eschewing the usual social bribes.  With all this sedate Taurus energy and with Mercury retrograde, we might not see the fiery quality of Jupiter in Aries right now, in May. But we have a year for it to assert itself.

And so, the coming year looks hot, literally and figuratively.  Hot people often do wild, crazy things. When people are highly uncomfortable, they act on impulse, and there are more accidents, more wars, and more revolts. The earth also responds in cataclysmic ways to high concentrations of heat, and she may spend some time sweeping those pesky humans off her surface. This is all the more reason to pay attention to the message of the north node, which will stay in Taurus all the time that Jupiter is in Aries. It’s like a voice telling us to stop, take a few deep breaths, and quite literally cool out, before it’s too late.